As many of you know I traveled to Uganda on a mission trip
and some might know my dream of adopting
My husband and I agree that adoption will be a few years from now
But whenever I see any sort of adoption story, blog or program I have to make sure I look into it.
Last night I watched a documentary called "The Art Star & The Sudanese Twins"
It fallows an artist named Vanessa Beecroft that took a trip to Sudan and while on her trip at an orphanage was introduced to very ill twins. she revealed that she was still breast feeding her baby at home and offered to feed the babies. from that moment on she was on a mission to adopt these little ones. the problem was they still had a father that was alive and a family willing to take care of them, Sudan did not allow international adoptions, and her husband was not in agreement that bring the twins into their home was the best thing for anyone. But she tried anyway. and ultimately failed and gave up. Not really a story book happy ending but in my opinion after watching the whole movie it was the right ending.

God took Vanessa Beecroft on this journey for a reason. I am not sure what that reason was. she doesn't really go to much into that except that it brought out a new level in her art. which is one thing that I did appreciate in this whole movie. well honestly some of it was a little out there too.. (it's A LOT of nudity) but this one picture is just in my opinion beautiful! it might be the whole breast feeding or the sweet African babies or the virgin Mary feel but whatever it is I seriously want to purchase this picture and hang it up somewhere in my house. except I don't think my husband or three little girls would approve....... 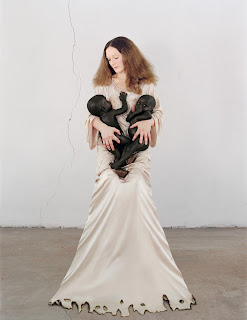