I was about 14 years old.
I hung out with a group of neighborhood kids and in that group was a boy. We were not close. In fact I only remember a few things about him. He only visited every other weekend with his dad but for the rest of the time he lived with his grandpa. I remember telling him he looked like a blonde Harry Potter. I remember he was funny.
One night he was sound asleep in his room upstairs.
The local news showed video of his father pushing the fire fighters to get into the burning house.
It was so sad.
Matt had passed away we were told in his sleep.
I barely knew him
but will not forget him.
soon after I developed a fear of fire.
I don't light birthday candles or any candles
when we have a fire pit I spend the entire time in a panic
I like fireworks only when professionals are lighting them
but the last couple of months I feel like this fear has intensified.
A family I love dearly lost everything in a house fire on Halloween night.
my aunt had a fire start in my cousins rooms. thankfully in both cases no one was hurt, but two weeks ago in my mommy group we were told of a little baby that was in desperate need of prayers.
he was trapped in his crib during a house fire and his hands were melted to the bars. He is still fighting for his life at Cincinnati Shriner's hospital.
It breaks my heart. I have been praying every day for him and I leave Stella's bedroom door open at night now.
after hearing all of these stories
I have nightmares and some nights just stay up because I am terrified that something will ignite.
I made my husband install alarms in EVERY room of our house.
that helped.
but  last night i had another nightmare.
In the morning I shrugged it off.
Got the kids up and dressed, breakfast, teeth brushed, and I put on my makeup. we had plans to hang out with my grandma and JP.
I spent 40 minutes shoveling snow off our driveway. it was mainly ice so it was not easy and I was getting  worn out.
I looked and figured "ah that will do."
got everyone buckled and put my van in reverse. made in down the hill but then the wheels started spinning with no traction.
great! I thought.
Got out of the van and walked around to remove some snow around my wheels.
Got back in started the car
black smoke hit my face!
completely filling up the whole inside of my van.
it went so fast and I don't remember how but I grabbed both my babies, diaper bag, keys, ran inside and called 911. 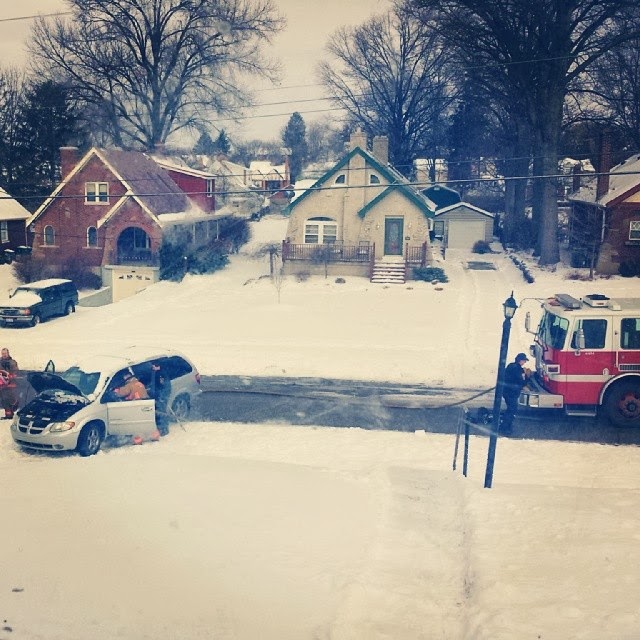 all my fears of a house fire and not once did it occur to me that my car could catch on fire!
The fire fighters said they believe it was something with the wiring that caused it. I thank God we were still home where I could safely and warmly keep my babies away. I also was thankful that one of the fire fighters is actually a neighbor! when I called the tow truck to help get the van off the street the man was a father of one of Julia's soccer teammates! just little things like this that lets me know God's got this.
Everyone is safe. we are down a car but it's just a car.
Thank God it's just a car.
Please check your fire alarms!
have your car inspected.
and keep all the families effected by fires in your prayers.
we have some thank you letters to write to the fire department.