I am a proud big sister! (weekend surprise) 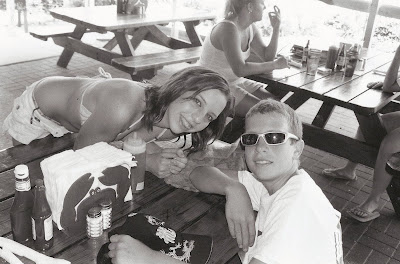 This picture was taken back in 2005! seems like a lifetime ago! back then i loved my brother because i had to but he was always the one that would have a devilish side to him. I always tell the story of how he would throw these temper tantrums about a video game or one time chased me around the house with a hammer! (no one ever got hurt but we were scared of him!) And yet he was the sweet little boy my mom would just melt over every time he gave her those blue puppy dog eyes of his. he could get away with murder if it was up to her.
Now I love my brother because of the man he has become! He's a great person with a huge heart! I am so proud of the fact that he is so driven to achieve his goals in life. My baby brother is a solider! more specifically a fire fighter for the US Army! earlier this year he graduated boot camp and we took a trip to see his ceremony. It was so amazing to see how mature he grew up in those 12 weeks. And i saw in his eyes just how much he loves his family. especially his god daughter miss Belle. 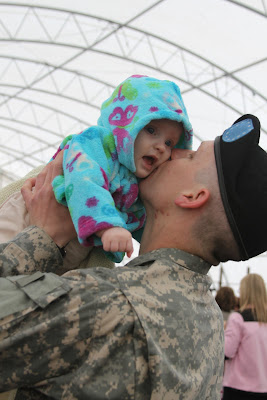 Being in this big white tent watching him march with all his boot camp buddies was so moving and made me so proud to be an American. we had been sending him letters every week waiting for this day that we would actually see him. When hid drill Sargent released him for the day to spend with us my mom took off running. I jumped up on a pile of tarp to get a better view. mom was going the wrong way and Gage was headed towards me. It was like a movie! I held my hand to Gage and said stop! then looked at my mom and pointed to Gage. I had never seen my mom run faster than that day. i picked up my camera and snapped! this is one of my all time favorite pictures! it is hanging on my wall and was featured in a local newspaper. but it will never even come close to living that actual moment of watching my mom and my brother finding each other in a room full of soldiers and their proud families.........(tears) 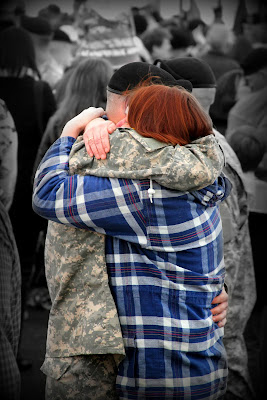 we got to spend the whole day with him we went bowling and had dinner together. I am so proud of my brother Gage and am so excited because last week he sent me a message that he was coming home on Friday the 7. but wanted me to keep it a secret he wanted to surprise my mom. It has not been easy my mom has had a stressful week and knew this would cheer her up but it wasn't my surprise to tell so i bit my lip. and now my Brother is pulling into the driveway of my moms house! she has no clue shes just sitting in her kitchen drinking her coffee.................ding dong!
Pin It