After Belle was born I witnessed something I never imagined
My little rebel, trouble maker of a brother's heart melted.
He just fell so crazy in love with her and being an uncle.
He was so protective and loving and playful and he was teaching her little baby tricks like blowing bubbles and peekaboo.
I knew he would make the perfect God Father to her
so much so I didn't feel like she needed a God mother.
Then he signed up for the Army.
He signed up for 5 years as a US Army Firefighter.
and we were all so proud of him.
We traveled to his boot camp graduation and got to spend some time with him before he headed off to his tech school and base.
I remember a conversation we had at one point where he was holding her.
He said "I don't want her to forget about me."
it makes me cry even thinking about it now.
I promised him I wouldn't let that happen.
They have phone calls and during his visits home he always makes extra time to just hang out with the girls. we send letters and she has his picture in a frame on her dresser.
She loves her Uncle Gage.
This week in home school Preschool, I wanted to teach her a little bit more about the Military.
We learned the Pledge of Allegiance and how to place your hand over your heart. 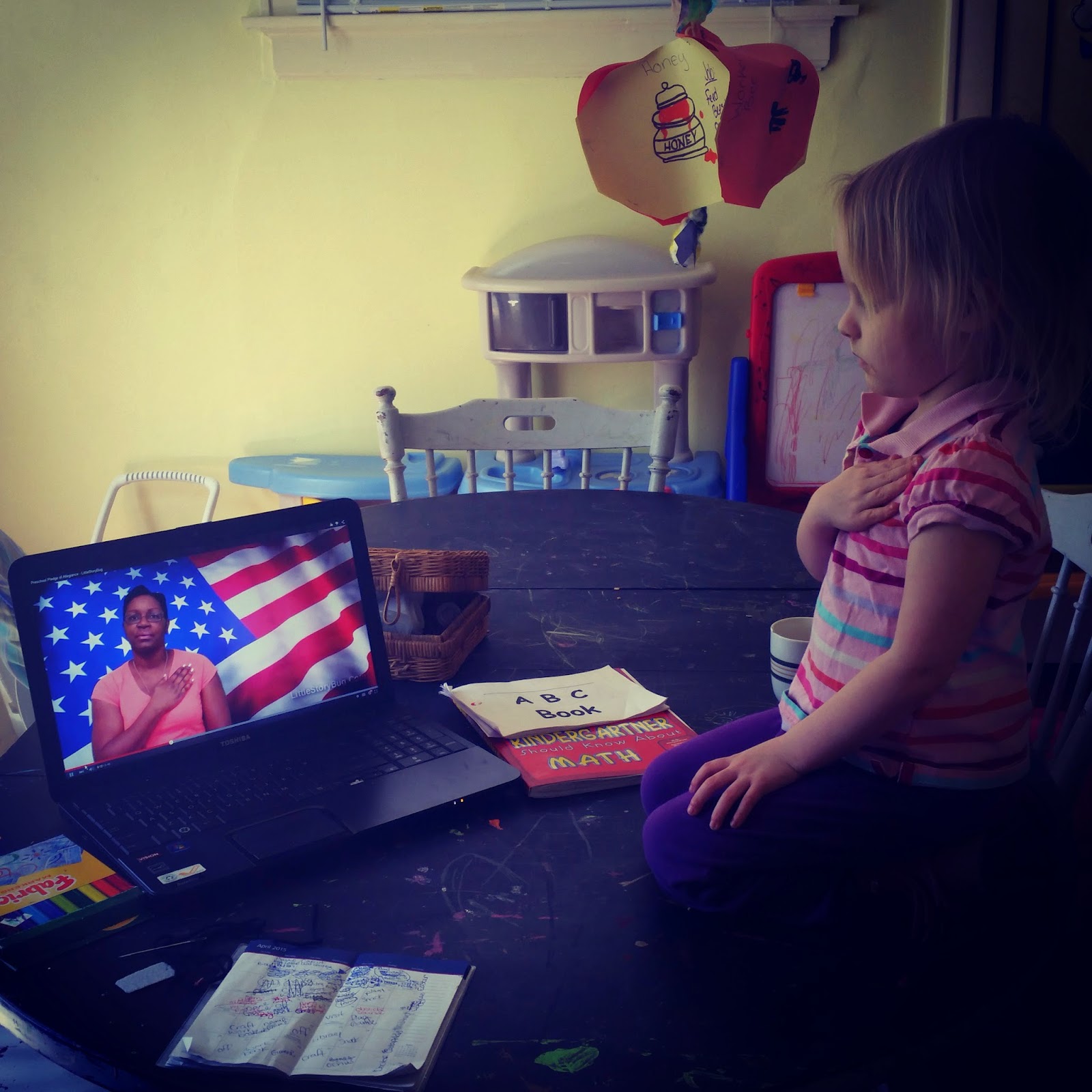 She crafted her very own dog tags with her name and address. 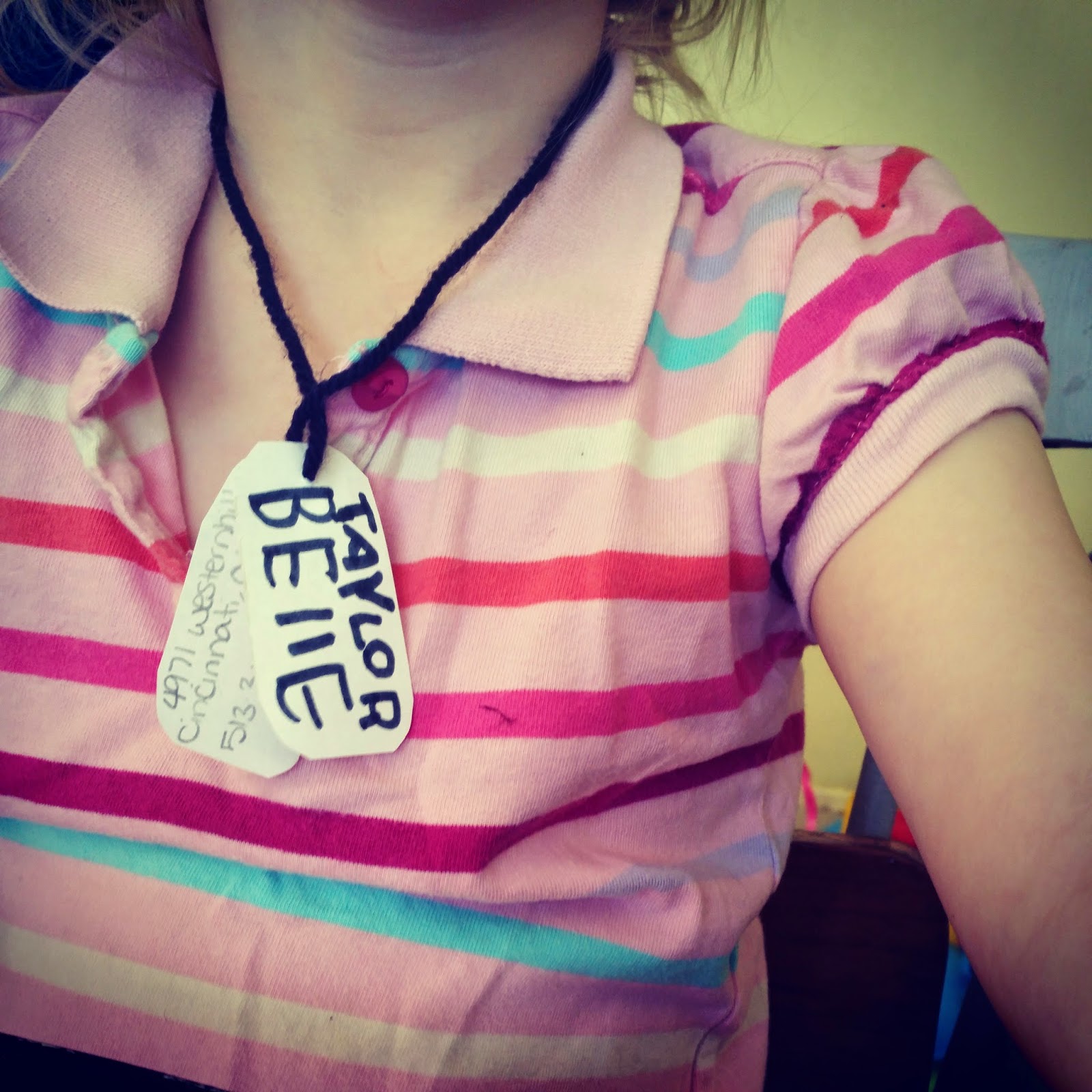 We learned about camouflage and we played eye spy with different soldiers in camos at different locations in pictures. 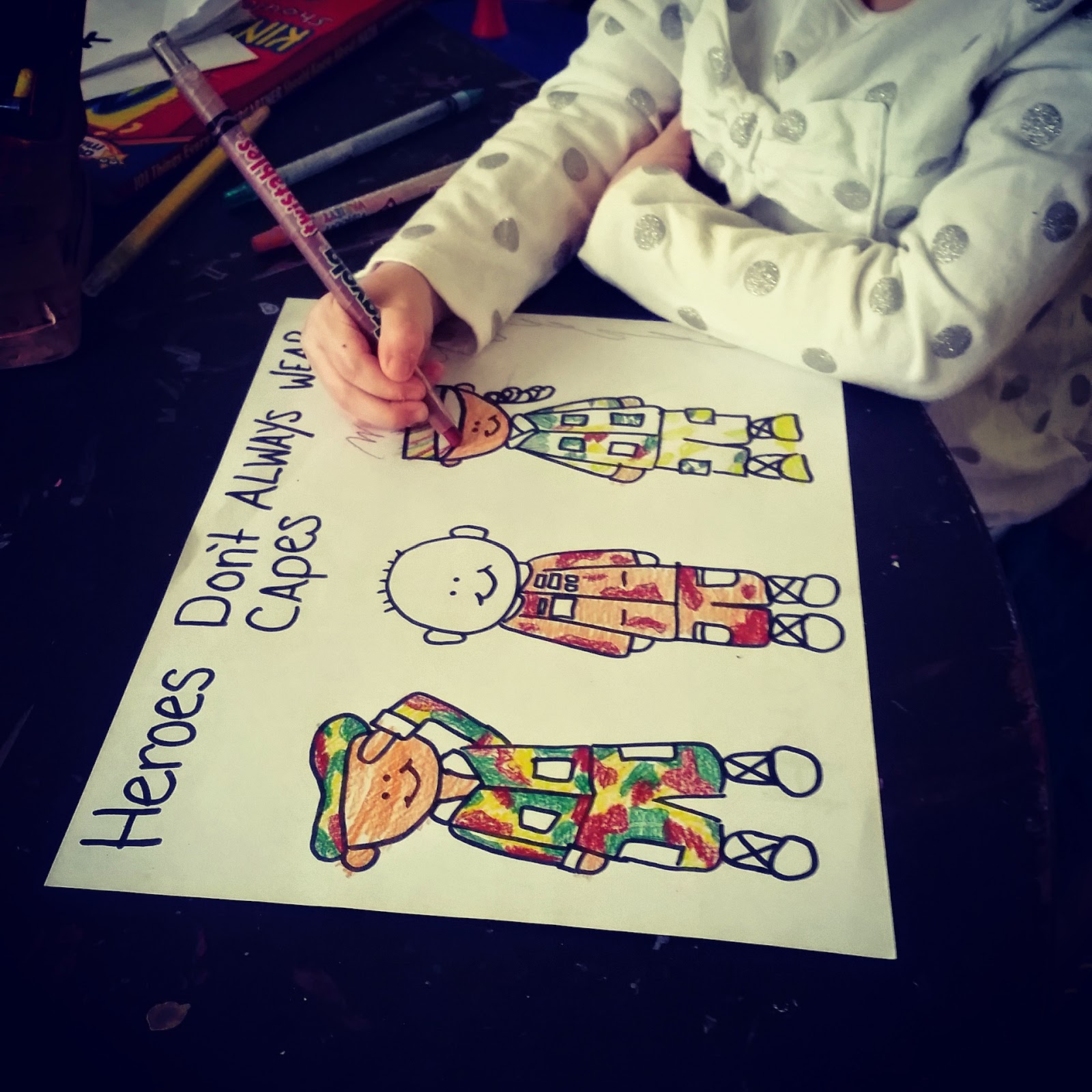 she wrote a thank you letter to her uncle for his service. 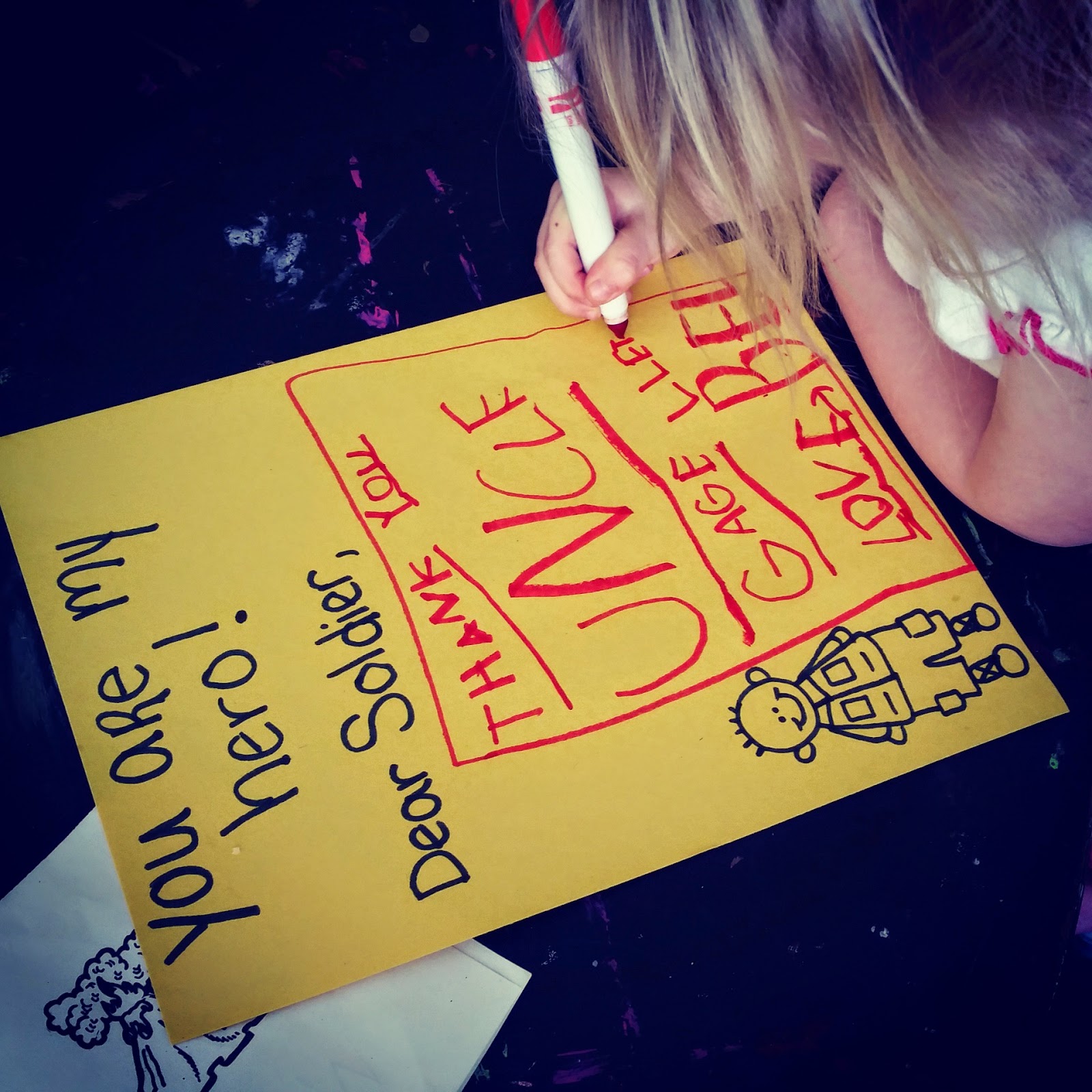 then she drew herself looking up at him. 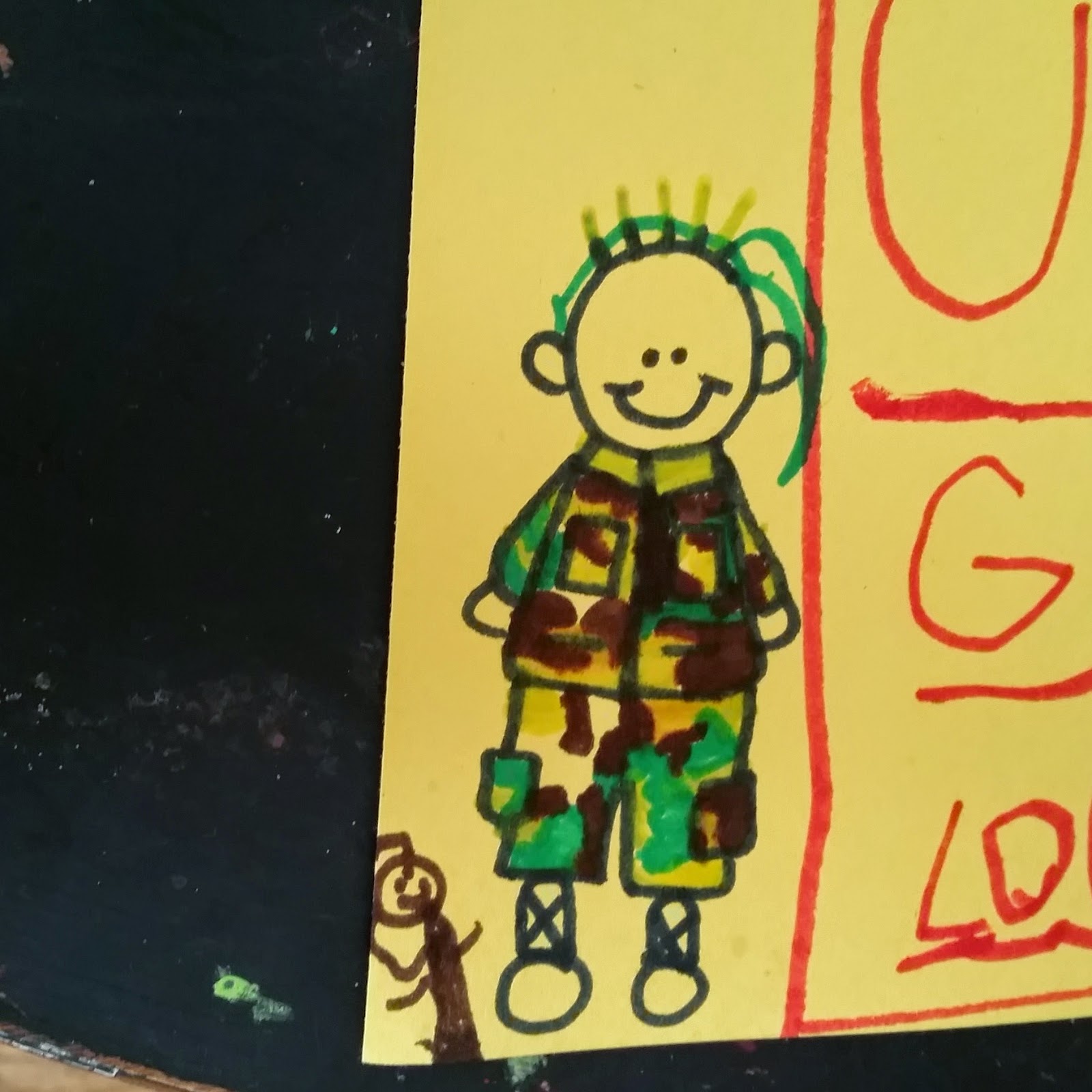 Along with my brother I have many other family members who serve in the military.
including my late Grandpa.
He passed before my children were born
I know he would have been just as crazy about them and Gage is.
His flag is sitting on the mantel at my Aunt's house.
we went to visit my Grandma who is living there also
and I showed Belle the flag. we talked about how to salute. 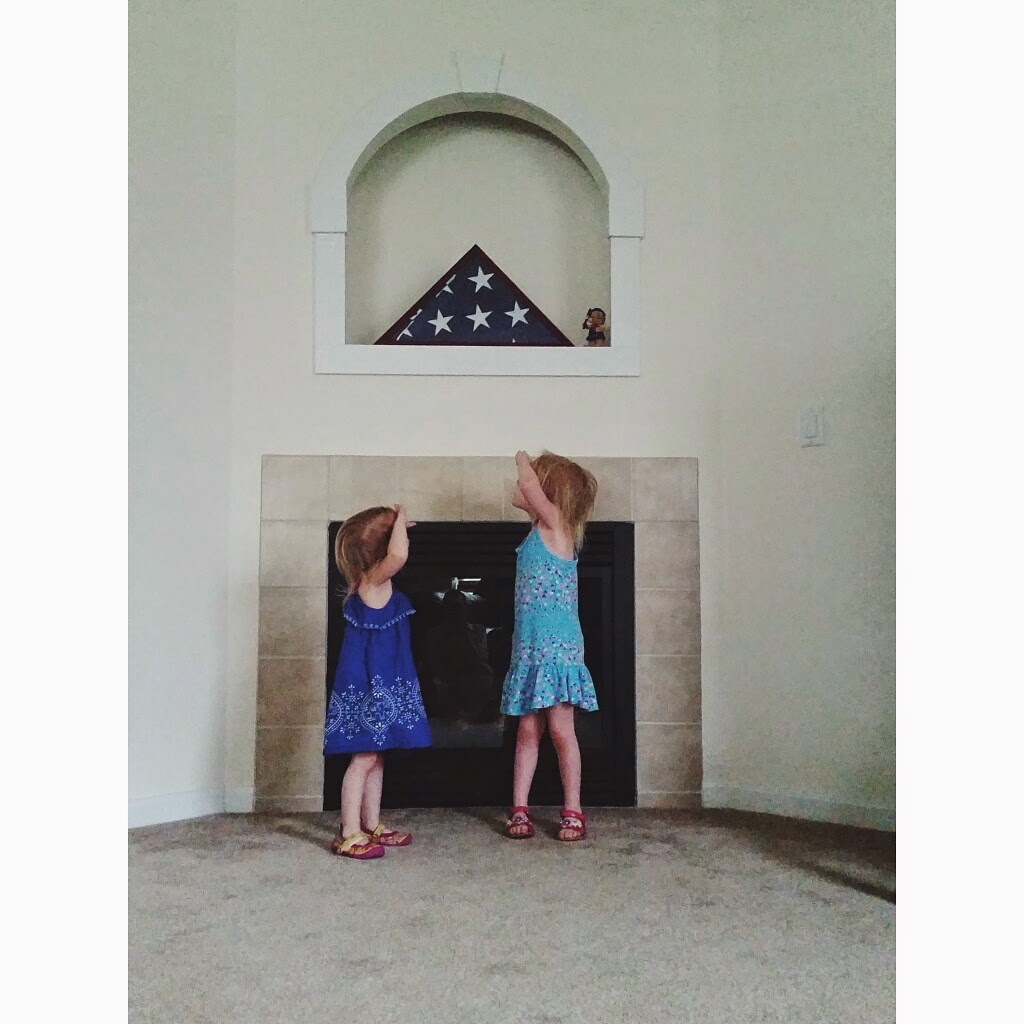 She is moving along in her workbooks numbers 10,11,12,13 and 14
we are still working on flash cards with the ABC's  she's got over half of them memorized but we will keep doing them until she has them all.

It is very important to my husband and I that our children show respect to those who served in the military. We teach them that being a soldier is a very dangerous job and it requires people to leave their loved ones and homes for long periods of time. and because they said, yes mommy and daddy don't have to.
We should always say thank you.
My husband is really good about going up to a person wearing a veteran's hat and thanking them. I am a little more shy but I know it's important so I am working on it too. it's the very least we can do after the huge sacrifice they did for us.