yes you read that right, I am thankful for Facebook. :P 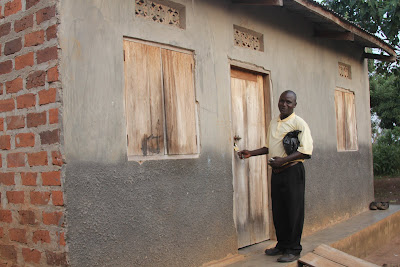 This is Richard at his apartment! I am so excited to talk about him! Richard is the man in charge of St. Jerome Cove Center during it's day to day activities. He is Father Hilary's right hand man. Richard was studing to become a priest but the bishop told Richard that he had more bigger things to acomplish. Richard was crushed but I think the bishop was wise in his desicon because if Richard was to have finished in his journey the children and Cove would not have an amazing sweet and kind soul.
As we would drive around the streets of kapeeka, Uganda, Richard was our tour. He answered every silly question we had. One time I asked him "Richard you have the skinniest cow I have ever seen!" and with that signature laugh of his he said "no food." afterwards I felt so stupid for asking that and embarrassed that the cows in America get treated like kings and queens compared to the people of his country, But Richard made sure I didn't feel guilty he said "no worries." and smiled at me.
Richard knew that the overwhelming poverty that we would witness could cause us to get sad and depressed so every time we would get into the car to drive Richard would make it appoint to check on everyone.
"Kassondra?"
"yes Richard?"
"How are you?"
"I'm fine Richard."
Then he would laugh again and move on to the next person.
Darlene and the others at Cove have been petitioning for 3 years to get Richards Visa approved so he could come visit us here in America. He said he wants to ride a roller coaster :) They have been denying him because he is not married or has children so they believe Richard would not come back home. But that's ridiculous because Richard is so dedicated to his job at the center I think it would be hard for us to keep him here the whole time of his visit.

I am thankful for Facebook because Friday night it was getting late and I was about to log off the computer when a little message came across my Facebook IM that said:
"Kassondra, how are you?"
it was from Richard! He said he was on vacation to Kenya to help out the people suffering from the drought. (see why i love him, he called it a vacation!)
he said he is hopefull that he will get to visit us next year! He asked about all of my Uganda family that traveled to meet him and said how much he missed us. He told me every night he leads prayers with the children at Cove and they pray for each one of us that visited them and he said last night they prayed for my girls!